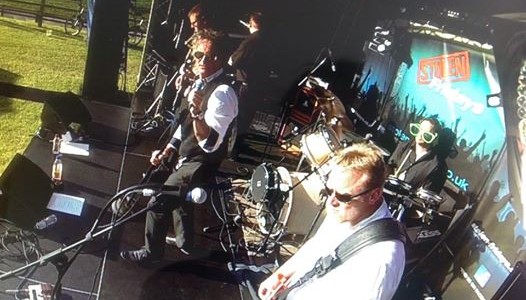 Posted on 26/06/2014 by admin | Posted in: Latest News Comments: Comments Off on The Wheatsheaf & Waddington Air Show

Well, after a June filled with private bookings and baking beneath the sun on the Member’s Lawn at The 130th Lincolnshire Show – we’re back to public performances through July.

Friday July 4th sees us kicking off the Waddington International Airshow in style at The Wheatsheaf, Waddington so if you’re suffering from a bit of Friday’s withdrawl (rapidly becoming a recognised medical condition!) then why not pop along and see what it is you’ve been missing?

Saturday the 5th we are live on stage at Retford Fake Festival, supporting three great tribute acts; Supreme Queen, The Fillers and Total Stone Roses.  If you’ve never been to a Fake Festival before, it’s a great day out and well worth the ticket price, plus you get to see what we can do on a big stage!!

Sunday the 6th sees us wrapping up the whole Airshow weekend on the lawn of The Officer’s Mess, RAF Waddington, and what a party it promises to be!  So, if you’re likely to still be on camp after the spectacular aircraft displays are all over, why not mosey on over and let off some steam?

Hope to see you all at one of these events…